Brain Teaser Puzzle: Can you Remove 3 Matchsticks to leave 3 Squares only in 20 secs?

Brain Teaser Matchsticks Puzzle: In this Quiz, try to remove 3 matchsticks to leave 3 squares only in the picture. Can you solve this puzzle in 20 Seconds?

Can you Remove 3 Matchsticks to leave 3 Squares only in 20 secs? This brain teaser is for those who enjoy solving analytical puzzles and games. Brain teasers are mainly a trickier version of riddles and puzzles, as these brain games are solved with lateral thinking. While solving these, you need to analyze a little differently and out of the box. For coming on to the solution, you need to use a creative mind as the answer won’t be right in front of you. So, we have come up with an interesting brain-teaser where you remove 3 Matchsticks to leave 3 Squares only in the image.

Can you spot an old woman or a young girl hidden in this Century Old Optical Illusion?

Remove 3 Matchsticks to leave 3 Squares only in 20 Seconds 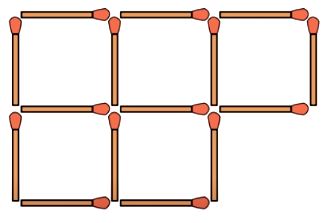 In the above image, you need to remove 3 Matchsticks such that only 3 Squares are left. An alert mind can solve this puzzle within 20 seconds. You need to analyze the Matchsticks structure carefully shown in the image. As a heads up, the answers to this brain teaser have been given right below the question, so make sure you don’t scroll too far and cheat!

Hint: The squares can be left in the upper row or the lower row.

Optical Illusion: Face you see first reveals what you Hate most about your Partner's Personality

In this brain puzzle, you need to remove only 3 matchsticks in the puzzle such that only 3 squares are left after removing the 3 matchsticks.

Stairs Optical Illusion: Can you guess in 10 seconds which way is the object moving?

If you remove 1 middle matchstick from the top and 2 matchsticks from the bottom left, you will get 3 squares as shown in the image given below: 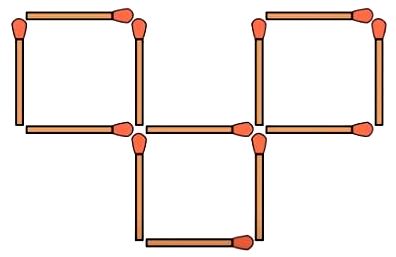 Can you Spot all Hidden Faces in this Optical Illusion Image?

Using lateral thinking will help you to derive answers in such brain teasers. This riddle was tricky but simple as it needs less time and brain power to solve. But it sure feels great when you figure out the answer in a few seconds.

Get the latest General Knowledge and Current Affairs from all over India and world for all competitive exams.
Comment ()